Feedback for my debut Listener crossword  – a tribute to the late Iain [M] Banks – published in The Times, Feb 2017:

“What a great puzzle. For me it was one of the two most enjoyable Listeners this year. Lovely choice of theme and a treatment of it that could hardly be improved. Some wonderfully tricky clues with entertaining surfaces added to my enjoyment. Allocating the +Ms and -Ms to Across and Down clues respectively made for a very neat package, but it must have increased the difficulty of clue writing. I always admire setters who don’t take the easy way out. To cap it all, a very accomplished grid.

Fortuitously, I discovered the letter M ploy in my first two solves – 1a and 1d. However, this didn’t take away any of the pleasure gained from completing the grid.

It’s always a pleasure to welcome new setters with fresh ideas to the Listener fold, and this was right up there with the best. Thanks to Encota for a most enjoyable solve and I for one am looking forward to more of the same.

I thought this was a terrific debut Listener with the theme cleverly embedded in the grid and the clues. I started noting the missing and added letters in the clues and it took me a while to notice that they were all Ms!

It was when I saw that The Algebraist, a book I had heard of, fitted in the grid that the penny dropped. Super crossword!

I thought the puzzle was great, with a clever device in the across and down clues and books. Thank you Encota!

I agree, this was an excellent puzzle, and a splendid tribute to a great talent (only one side of whose aspect I have really appreciated).

Good fun and a welcome relief after the difficulty of completing last week’s Listener and Inquisitor.

Wonderful to see this tribute, and quite neatly done too. Many thanks, Encota, this gave me pleasure and reminded me of much pleasure given by the theme.

I thought this was great fun, even though I’m not a great fan of the theme (my fault, not its). I found the middle portion of the grid really quite tough. Thanks, Encota – I really enjoyed it and maybe I should give the theme another shot.

Yes, a lovely set of clues and a fine tribute. Many thanks Encota.

Very enjoyable indeed and a relief to have no grid staring. One half of the clues were (inevitably) harder than the other, but all was fair and above board despite one or two obscurities. Great fun – thanks Encota.

Tough to get started, but it all fell into place nicely, with some tricky parsing to keep it challenging to the end. Thanks, Encota!

Excellent – a nice tribute to a favourite theme – I like both halves and might even raise a dram to a third variety.

I tackled this very late in the week and after a slow start was worried that I might not have it finished before the next Listener, but the theme gradually emerged without too much fretting. I thought it was a very fine puzzle. The theme was superbly implemented (better than “quite neatly” in my opinion) and the clues very enjoyable. Given the constraints that Encota set himself, I didn’t mind the above-average number of three-letter entries. The grid is a fine achievement in itself, and far better than many setters manage to create. 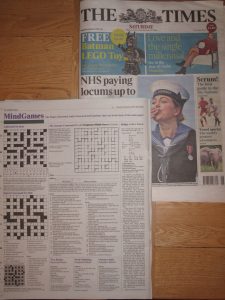 Feedback for my Midsummer 2018 Listener crossword  – themed on Shakespeare’s A Midsummer Night’s Dream – published in The Times, Jun 2018:

Listener 4508, ‘Moon’ by Encota.  The puzzle featured the play’s weaver, Nick Bottom, and used the same phrase to instruct solvers to remove the last letters of clues before entering them in the grid …